Datris has been applying its AI technology to develop a Community Mapping Tool that can identify, validate and profile community based organisations, clubs, groups and charities.

In the UK, for example, it is estimated by the NCVO (UK third sector umbrella organisation) that there are between 600,000 and 900,000 not-for-profit organisations, ie approximately 1 per 100 of the population (66 Million UK population).

90%+ are small or micro organisations, often run by volunteers, and only a minority are legal entities as such as charities, trusts or social enterprises.  Many will not have websites and only exist on social media.   Because these informal organisations are hard to find and described as "below the radar" no one has been able to effectively discover and map out community organisations, form the benefit of policy makers interested in community regeneration and public health and wellbeing.

We categorise them under (i) Sport & Leisure, (ii) Arts, Culture & Education, (iii) Community Care & Wellbeing, (iv) Faith and (v) Profssional plus Other!

Extensive research demonstrates that where individuals participate in local clubs or groups that interest them, they have better mental and physical wellbeing, members also support each other, and pressures on the health system can be significantly reduced.  This is sometimes described as "social prescribing".

Our DatrisAI Community Mapping Tool is being specifically designed to assist local authorities, governments and agencies to identify and map out existing groups and activities in their defined geographic areas.  We are doing this via key scraping and analytics processes, with the machine learning algorithms and NLP set to become more automated and gaining high levels of accuracy/validation.

The DatrisAI Community Mapping Tool is designed to be used by local governments or agencies who wish to discover the extent of community-based clubs, groups and activities in defined areas.

It can then be used for:-

- Policy Making ie from the overall information, by type and micro-community within the area

(i) Agreed definition(s) and descriptors linked to a defined area

Social Prescribing - defined in a clinical setting with a doctor as "What matters to you" rather than "What is the matter with you".

Could also be used in "verticals" ie finding specific types of organisation or people.

We are not aware of anyone applying AI in this way before.  At the core is the intelligent integration of established processes of digital data scraping with multiple cross searching and machine reading, linked to machine learning to validate entries in a step-by-step process with probabilities attached based on confirmed factors.

From our most recent Pilot in a county of 140,000 inhabitants (1,300 groups profiled), we have established a series of key variables and processes which we shall in future aim to automate. 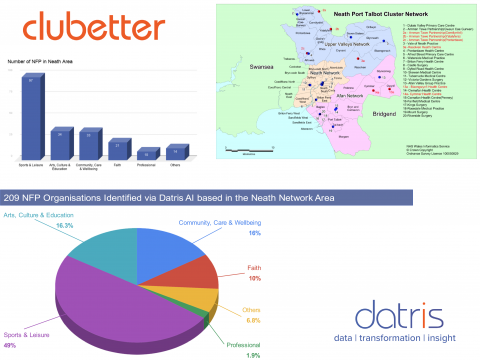